An event with the University of Nottingham and Lakeside Arts Centre.

It was a pleasure to welcome a number of VIP guests to celebrate the Small Collections Room at Nottingham Contemporary. This is the first time an event has been held to highlight this corner of the gallery and take a closer look at what can be found within.

The artist Pablo Bronstein was commissioned to  create a 21st Century take on a Renaissance cabinet of curiosity or wunderkammer  (literally ‘rooms of wonder’). The Small Collections Room has been running an exciting programme of mini exhibitions since the gallery opening in November 2009.
The room houses four ornate 17th & 19th century cabinets with numerous small drawers and compartments housing the work of artists, writers and cultural commentators. Visitors are encouraged to explore the cabinets, opening the drawers to discover the objects inside.
This event was organised to highlight the work of Kashif Nadim Chaudry who filled two of the four cabinets with an exhibition entitled Confessions of a Magpie in reference to a collection of beautiful objects.  Nadim studied Textiles at Goldsmiths College, London and has a rich family history in tailoring.  He compares the work to dioramas, small pictures, each one telling a story within its own drawer.

Nadim is currently artist in residence at Lakeside Arts Centre and has also worked at Nottingham Contemporary as a valued Gallery Assistant since the opening in 2009.  This set of circumstances provided the perfect opportunity to highlight the ongoing relationship between the two venues.  A key factor of this is valued support the University has provided to Nottingham Contemporary’s public programme.

Nadim said “It's been a real pleasure exhibiting in the Small Collections Room especially because as a gallery assistant, you get to see the joy and pleasure on visitors faces as they discover the draws and what is going on inside. Last night’s event was also very special and in many ways it reflected the Small Collections in its informality and intimacy.”
It was a pleasure to welcome Richard Flisher from CPMG Architects , our newest Business Benefactor  and to meet Daniel Hanson in person following enjoyable conversations by phone and email regarding special Business Benefactor events. Our Director Alex Farquharson and the Visual Arts Officer at Lakeside Arts Centre, Neil Walker welcomed the group and invited guests to enjoy a glass of wine and canapes with the chance to explore the drawers of the cabinets.  The event had an enjoyable intimate feel; those who attended included individuals from the University, Primary and Nottingham Contemporary who came together in a relaxed and sociable atmosphere.
This event and exhibition acted as a taster to the stunning and dramatic exhibition of new work which has been produced  during his residency titled Memes . The exhibition opens on  Wednesday 11 July at the Djanogly Art Gallery, Lakeside Arts Centre.
Posted by Nottingham Contemporary at 08:35 No comments:

"Can I ask why a Gillray exhibition is happening at Nottingham Contemporary? Not that I’m at all interested in policing period boundaries - it sounds like a great idea! - I’m just intrigued…"

It is a fair question, - one of many we hope to answer via the Public Programme. This series of events allows the critical and contextual motivations of curatorial decisions to come to light. In the case of Gillray, the question is not only ‘What does the work of a long-deceased 19th century satirist have to do with contemporary art’? We are also using the Public Programme to ask in what other ways his work remains relevant - how does its context connect to questions of media, communication, colonialism and political action, for example..?


The person asking this question was Richard Taws, a prize-winning young lecturer at University College London. His work places Gillray's caricature in relation to a universe of print media used to circulate conflicting representations of revolutionary politics on both sides of the Channel and beyond. The leaders of the French Revolution wanted to spread their new national ideology beyond geographical boundaries - and this ambition spurred on a second revolution - a wave of experimentation with new communication technologies in France. French Revolutionary ideals (brotherhood, freedom, equality) were undermined by the fact that France was still fed by colonial slave labour - and one outcome of their parallel revolution in communication technology was that ideals of equality were heard, and radically appropriated, by those working in slavery overseas. The Haitian Revolution (1791-1804) is often considered as the ultimate test to French Revolutionary ideology. If all men are created equal – would that also include slaves? Richard's talk on 16th May will lead us to this point of tension, and it will provide an introduction to the contested history of Haiti itself – a country whose art will be the subject of a major new exhibition opening here at Nottingham Contemporary in October. In this way, the Public Programme also allows us to underline the connections and continuities at play as we move between different temporary exhibitions.


The question could however have been answered in two words: Alan Moore. The acclaimed graphic novelist is visiting us for a live discussion in May. According to the University of Nottingham’s Matt Green, the James Gillray connection was the main reason that Alan said yes. The discussion will link the two boundary-pushing graphic artists via various tangents - from the Gothic imagination to underground publishing and radical politics. Sharing the stage with Alan is Melinda Gebbie - a long-standing force within the underground female comics movement.  Her participation will establish connections not only to Gillray but also to Mika Rottenberg – whose work will also be occupying three of our gallery spaces. One of the ideas running through Mika's work is female self-definition; she identifies herself as a feminist and cites Karl Marx as a reference. I admit that my first copy of Moore’s V for Vendetta was stolen from my boyfriend’s bookshelf, but the work of Gebbie (as well as that of Karrie Fransman, Nicola Streeten and Mary Talbot - will remind us that cult comics are not only for the boys.

Heather Kirk & Lizzie Thompson reflect on their favourite moments being part of Get Involved 17, the Nottingham Contemporary youth group


HK: Only being part of Get Involved 17 since the beginning of January, the first few months for me have been eye opening. I first heard about Get Involved 17 through my college and I immediately thought it would be a great opportunity for me to build on my skills, get a taste of the art world and experience working with other aspiring young artists which will help me with my Fine Art degree.

LT: After joining Get Involved 17 in September there have been many memorable moments. We have organised events and showcased these to the public, made films of the public’s opinions and made artwork which is to be showcased in Bulwell Riverside. It has been an exciting experience and within it I have made many new friends.

I particularly enjoyed our first project, The Lab, as this was a completely new experience for me. We were able to ‘take over’ The Space for a whole weekend and hold an event which we had been planning, inspired by Klaus Weber’s exhibition.  We had lots of stalls each inspired by different pieces of artwork and involved the public in different ways. For example we made a tree, on which we hung old, broken and unwanted items, to show how humanity was trying to control nature and was abusing the environment. This linked to Klaus Weber’s ‘Tornado machine’ as he too was trying to control nature. The rest of the stalls followed a similar thread, with the ‘13 impossible questions’, sound machine, and ultimate invention designer. We also created a film asking people around Nottingham ‘If you could invent anything what would it be?’ 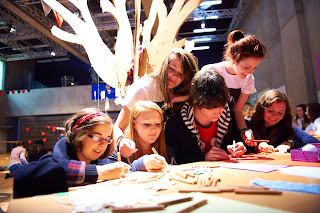 HK: Being introduced into Get Involved 17 proved to be a decision well made. One of the qualities of the group is the strong connection between everyone, and the friendship that we share. The Bulwell Riverside Project has to be my quality moment within Get Involved 17. This is because we have had the opportunity to work with a local centre and create pieces of work to represent The River Leen in Bulwell, which will then be exhibited within the building for a few months. This is a great opportunity as we are learning and gaining skills throughout the project. It also gives us the chance to exhibit our work and explain it to members of the public and people in the art world! I am very grateful for this opportunity and I don’t doubt that there are more quality moments to be had in the future.

LT: This whole experience was particularly memorable to me as it was my first project within the group and was exciting and new. Throughout the whole project I enjoyed acquiring new social, marketing and creative skills to carry on in the future.

Posted by Nottingham Contemporary at 08:34 No comments: