Gallery three’s door slowly glides open and I overhear a wife inviting her husband to join her ‘Are you coming in?’ After quickly peering round the blacked out door he replies ‘No’. I can’t help but feel he missed out. The room is brimming with experimental and intriguing imagery. Perhaps crossing the threshold into a space of manipulation and control just wasn’t his cup of tea?

Half hour shifts in gallery three provide either a meditative opportunity or acts as an endurance test. Shane the Alsatian and the MGM lion compete for attention. Barking and Roaring. But allow yourself to be distracted by another of the ten 16mm projected films and they become merely background purrs. The whirling, vibrating of the almost redundant technology animate the space before you even acknowledge the traced painting or dove falling off its perch.
Most recently I’ve enjoyed escaping for a few moments into the colourful world of a lumberjack, an athlete training or stuck in the middle of a natural phenomenon.

The line of records and row of headphones hide secrets and stories waiting to be unlocked by the audience. I switch to the green record at the end, ‘Three Felled Trees’.
I had a sense of knowing what was going to happen.
But anticipation and suspense still grew as I listened to the recognisable chop, chopping.
A tense silence followed 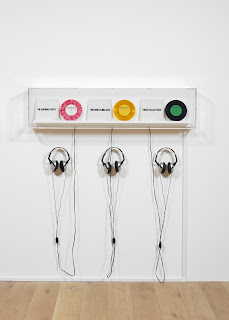 (I think I might even have held my breath)
Eventually the creaking escalates and you feel the tree just
start
to
topple
over.
I experienced the sense of achievement, of satisfaction and appreciation of the effort gone into the task at hand. I grin as comical scenes, ‘you’ve been framed’ moments of a tree careering into the side of a house or expensive looking car, overwhelm my visual senses. A theme of actively avoiding a formal narrative exists in all the films, sounds and performances of Goldstein’s and ‘Three Felled Trees’ is no exception. I was left to conclude the scene. Only achieved upon removing the headphones, because of course ultimately there are hundreds of felled trees.
Despite feeling uncomfortable as I listen to a couple of cats fighting in the alleyway…..my enjoyment of the headphone experience surprises me. I’m not much of a ‘sound art’ fan. Usually I’m drawn to experience and investigate visual representations.
So why explore only sound? Especially when Goldstein is obviously a dab hand at manipulating and translating film to control potentially dangerous and threatening situations. Well....It encourages us to rely on our own subjectivity, giving us the opportunity to control the situation, seeing in the mind rather than the eye.
It’s just like when you read a book. Locations and characters develop into logical constructions of colours and shapes. But then it’s transformed into a film. The visual format interpreted by just a handful of imaginations often leaves you feeling disappointed.
‘Oh? I always imagined them brunette’.
And I suppose logistically speaking re-creating a tornado just to film it gets pretty expensive, even with connections in Hollywood.
So instead the magician/ director/ puppeteer (whichever best assimilates the role of Goldstein in his practice) sets out a process. He selects a colour associated with the moment, the scene. Proceeds to a sound bank and gets the one off records pressed.
Simple and effective?

Posted by Anonymous at 16:10 No comments:

What part of the photograph am I describing? I stand looking at the photographs in short bouts (as my observations are undertaken whilst I am on GA duty in Gallery One). I cannot fully resolve in my head at what point my description of the image (if for a moment I refer to them both singularly) becomes something tangible. Where does the photograph stop and the print of the photograph commence? Let me start with a clear description, there are two works of equal size, each has a label next to the work, the wording on each label simply documents firstly the name of the work, one reads, 'Lynda' and the other, 'Jim' ; thereafter each label states the following: size (8" x 10") this is the size of the image in the print and an indication as to where the actual image is (perhaps) established. The date is 2007, the word 'C-print' (Chromogenic print...the process is alchemy) and finally I am informed that both prints are 'courtesy of the artist. Each print is presented for exhibition in a white wooden frame, and henceforth the dialogue of where the image begins ebbs and flows the more I contemplate the conundrum...I am transported back and forth between two worlds, the world of the print (the image of the sea, the sky and the horizon line) and the world of the photograph...which is more than the sum of the whole...but I digress...and my previous position becomes increasingly unstable. A white boarder nestles up to the white frame; drawing ever closer to the image is a black frame (this in actuality is the black paper in which the photographic box has been placed and skilfully photographed). The photographic box (for it is I believe the same box in both photographs) is open. The top of the box (the lid inverse) forms the next frame, the slender leading edges of the four sides are exposed and the colour is familiar to me...it is 'Kodak Yellow', the box has a resemblance to a gold frame and the box is care warn. Inside the lid is the base (the bottom half of the box) and inside this segment is the photograph of the ocean. Each photograph forms part of a pile: the contents of which could be related. The print rests upon a stack of other similarly sized paper and the heap raises the image almost to the top of the box itself...the box of prints are on the cusp of brimming over. The print of the sea has a white boarder...frames within frames...I am drawn ever closer to the image...focusing inwards, there are moments of contemplation...about the death of one's own parents, and curiously about cremations at sea...water soluble urns, scallop shell forms...hand painted and made of pulped paper; or maybe a different preference, an option of an unfired clay urn. Whichever the choice, each has been specifically made to disperse cremains as gracefully and appropriately as possible...they float for several minutes before sinking. Survivors require a place where they can reflect and remember...each photograph is the same ocean (research reveals that it is a view of the Pacific Ocean close to Catalina Island (which is off the coast of California). The image is the same...only different...a perfect coupling? I am referring only to the actual print of the sea which I believe may have been reversed at the printing stage. Each print is unique, individual: the box has been repositioned and re-photographed, each print is anew.

The closeness of this pairing is fundamental: of memories held by an orphan in the absence of parents.

Once termed an 'infinite jester', and guilty of gaffa-taping a gallerist to the wall, I necessarily function within and yet fight against the institution of art. At times elusive, I have hidden behind the persona of a gallery tour guide, mimicked drunk artists, sent other people to be interviewed in my place, and escaped from an exhibition by way of a series of tied bedsheets. When reluctant to work, I appropriate (steal) and re-exhibit pieces by other artists, or simply report missing (never made) works to the police. My portfolio also includes taxidermied horses that hang from ceilings and suicidal squirrels.
Posted by Maurizio Fraser at 08:38 No comments:

Memories of living beside the sea only fuel my interest in the void.

My love of vast open expanses.

Leading to a ‘bigger’ picture- questioning, what else might be out there…

…becoming easily distracted; and fascinated; by that moment of light,

between discovering and creating.

A very wise grandmother once told me in response to questioning her age ‘I’m as old as my tongue and a little older than my teeth.’

Thoughts. From an aspiring member of ‘hoarders anonymous’.

Posted by Anonymous at 16:38 No comments:

Of Italian and German/American extraction, I am fascinated by the poetry and aestheticism of all art forms, and have wide interests ranging from Gothic Revivalism through to the Pop Art of the '60s. I also have a particular fondness for cartoon characters and super-heroes, being distantly related to the 'Yellow Baron', the lesser known WW1 air ace renowned for surviving the war with the cleanest aeroplane.
Posted by Gabriel Von Lichtenstein at 06:30 No comments: