A Portrait of Pere Tanguy 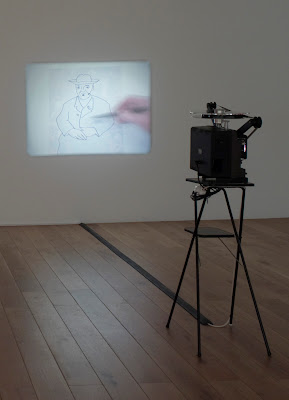 These words came to mind, when I first saw the bodiless hand of Jack Goldstein tracing the outline of Van Gogh's Portrait of Pere Tanguy. In the darkened gallery, it looked like a portent of doom writing its message for all to see. However, what it produced was not a prophesy for a pharaoh, but a crude outline of the portrait of a hero. Pere Tanguy, a purveyor of artists' materials to the likes of Van Gogh and Cezanne was regarded by them as a hero, because of his socialist views and the part he played in the Paris Commune.

Could it be that Jack G is referencing the way in which Hollywood treats historical characters by creating a caricature with no colour or detail? Whatever his purpose, the film ends with the crude outline falling away to reveal the masterpiece; 'Father' Tanguy sitting at the foot of Mount Fuji surrounded by his gallery of Geishas.

Of course, the original 'writing on the wall' was in Aramaic script, but included a word translated as 'PERES'. Just a coincidence or a message for us all?

GVL
Posted by Gabriel Von Lichtenstein at 08:38 No comments: